The University of Pittsburgh School of Public Health recognizes six alumni for their outstanding service to the field of public health.

“Achieving health equity — when every person has the opportunity to attain the best health for them — is not only good for the individual, but absolutely essential to ensure the next generation realizes their full potential. It is one of Pitt Public Health’s strategic imperatives,” said Maureen Lichtveld, MD, MPH, dean and Jonas Salk Professor of Population Health at Pitt Public Health. “Health equity is a recurring theme among the dedicated alumni I have the privilege of recognizing this evening. It is an honor that our school had a part in launching their remarkable careers.” 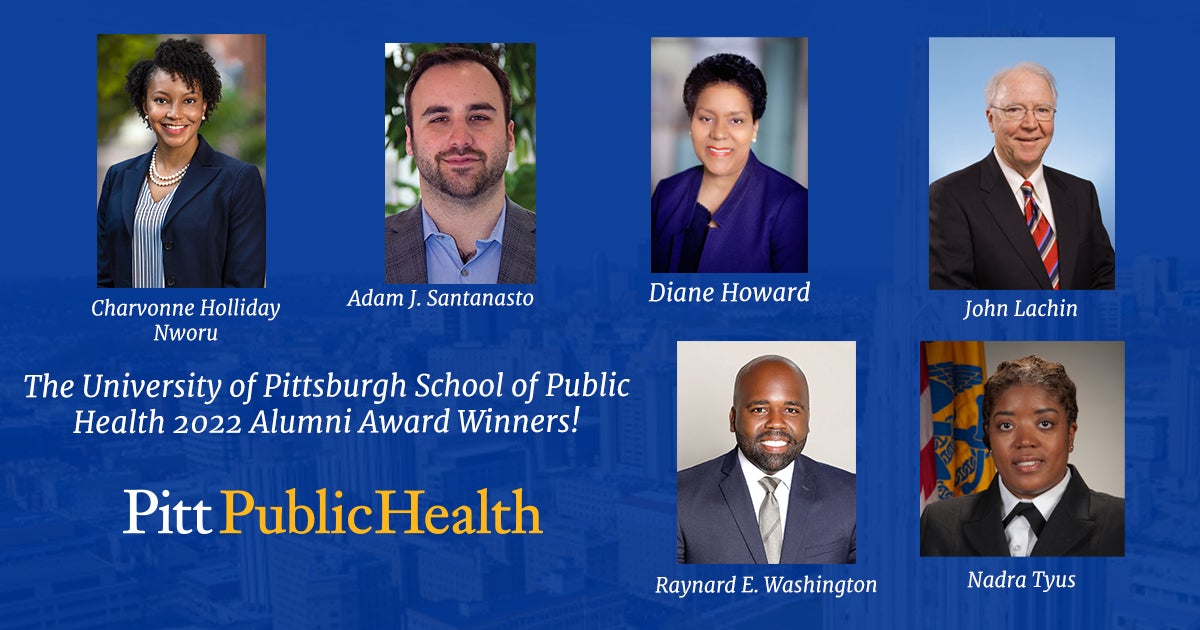 Raynard E. Washington, PhD, MPH, class of 2012 and 2009, received the Distinguished Alumni Award for Practice in recognition of his work as public health director for Mecklenburg County Public Health in Charlotte, N.C., leading more than 900 interdisciplinary public health professionals to protect and improve the health of the county’s 1.1 million residents with an emphasis on improving health equity. Washington previously served as chief epidemiologist and deputy health commissioner for the City of Philadelphia, completing the first-ever regional community health assessment. He also spent several years at the U.S. Health and Human Services Agency for Healthcare Research and Quality conducting analyses to inform and evaluate the Affordable Care Act.

John Lachin, ScD, class of 1972, received the Distinguished Alumni Award for Research in recognition of his leadership of multiple National Institutes of Health (NIH)-funded clinical trials to advance diabetes control and prevention. He joined the faculty of George Washington University Biostatistics Center after graduating from Pitt, advancing to center director and now research professor of biostatistics and bioinformatics at the GWU Milken Institute School of Public Health. He has authored hundreds of peer-reviewed scientific papers, including 20 in the New England Journal of Medicine.

Diane Howard, PhD, MPH, class of 1979, received the Distinguished Alumni Award for Teaching and Dissemination in recognition of her commitment to sharing knowledge both in and out of the classroom. Howard is associate professor and chair of health systems management at Rush University in Chicago where she teaches capstone, health care in America and professionalism courses. Previously, she held leadership positions at Aetna Inc., U.S. Healthcare, the American Hospital Association, Lake Hospital Systems and Rush-Presbyterian-St. Luke’s Medical Center.

Nadra Tyus, DrPH, MPH, class of 2005, received The Margaret F. Gloninger Service Award, in recognition of her significant contribution to the community through volunteer service. Tyus is a program leader within the NIH Office of Strategic Coordination, leading a $300 million Health Communication Science and Practice Program while also part of the Transformative Research to Address Health Disparities and Advance Health Equity Program. She previously served as a program director at the National Institute on Minority Health Disparities and worked for nearly a decade at the Health Resources and Services Administration in the Bureau of Primary Health Care and at the National Center for Health Workforce Analysis.